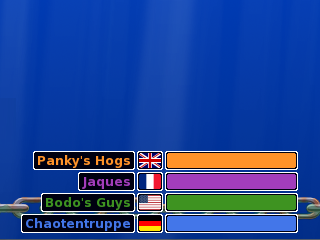 Flags are little rectangular images shown in the team bar as a team’s symbol.

To create a flag, draw a PNG image (RGBA mode, but all pixels should be opaque) of size 22×15 pixels.

To install a flag, put it into Data/Graphics/Flags of the Hedgewars data directory.

The file name must have “.png” at the end, the file suffix will not be shown in Hedgewars. Depending on the name, the flag will be displayed in different ways in Hedgewars:

Please note that the flags “ hedgewars.png ”, “ cpu.png ”, “ cpu_plain.png ”, a couple of community flags and national flags come pre-installed with Hedgewars. If you use a flag of an identical name in your Hedgewars user data directory, Hedgewars will show that one instead of the system-wide installed flag. That way, you can customize the default flag, for example.

Flags are not exactly displayed as the original image. In the game, the 4 pixels in each corner of the flag will always be “hidden” for the “round corner” effect. This is a very minor effect but might be important to remember.

Only in the team editing menu the flags are displayed with all pixels.

A list of official flags can be seen here.

Custom flags (flags which are not part of the official Hedgewars installation) are only visible to other players if they have the flag installed under the same file name.

In case the other player does not have the custom flag installed, the player will see the default hedgewars.png flag instead.

You are encouraged to share your flags in the thread “Flags! additions, submissions, information.”, where submissions are being considered for official inclusion into Hedgewars.