The file theme.cfg gives the engine the values associated with a certain theme, to complement the graphics. To understand themes in general, start at Themes. To learn more about the general file structure of themes, see ThemeFiles.

A theme.cfg is a text file which is structured with a list of keys, each separated by line breaks. Each key is followed by an equals sign followed a value. Values can be numbers, strings, or comma-separated lists of these.

There are also keys that replace existing keys under certain conditions, all keys preceding with “ sd- ” are used during Sudden Death and all keys with “ rq- ” are used when the graphics quality is reduced.

Following is the list of all current keys and their values, it is important to have the right number of values. Most keys may only be used once.

The values red, green, blue and opacity are in the range of one byte and can be specified in both decimal or hexadecimal form. A hexadecimal number must be prepended with a dollar sign. The range is 0 - 255 or $00 - $FF .

Any line can be made into a comment line by having a semicolon (“ ; ”) at the beginning. Comments are ignored by Hedgewars.

Literally all lines in the theme.cfg file are optional, thus an empty file is valid. Everything has a default value. However, some default values are not really useful (e.g. the water or sky color) and you should therefore explicitly specify enough values.

If this key is present in theme.cfg (the value does not matter), the theme will be hidden from the theme selection menu. Background themes must be hidden.

If this key is present (any value), girders become slippery like ice. This also applies to placed girders. This significantly changes the gameplay of your theme, so use wisely. If this key is not present, the terrain is not slippery.

Changes the rope appearance. This changes the distance between rope pieces. This only makes sense if you also use a custom rope image ( RopeNode.png ).

Land objects are images that are placed randomly on the map. Objects become part of the terrain.

There may be multiple object keys in the file, each one representing one land object.

Syntax when you only need 1 buried rectangle:

Syntax when you want to use multiple buried rectangles:

Here's an example where visiblerects and the buriedrects are visualized on an ancient picture: 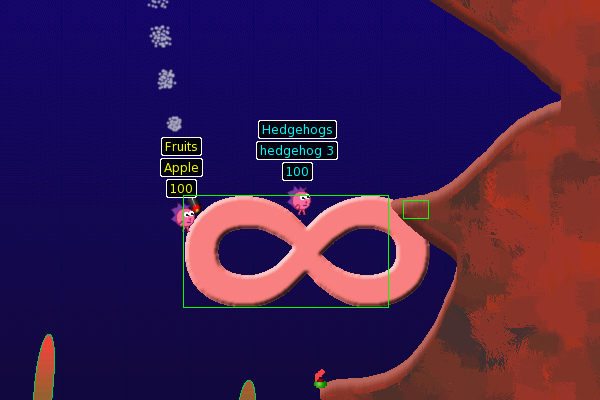 The large rectangle shows a visiblerects and the small one shows a buriedrects .

An overlay is an extension of an object. It is an image that is drawn relative to the position of an object that was already placed. Overlays create land just like objects do, but unlike objects, they are drawn on top of the main landmass, instead of behind it. An object can have multiple overlays.

This key allows you to assign 1 or more overlays to a given object. If multiple overlays are used, all overlays will be drawn for each object. This key must be added after the definition of the object you want to add overlays for.

An anchor does not create land itself, but instead is a setting that alters the positioning of an object. Each object can have multiple anchors. An anchor is a rectangle that is similar to a buriedrect , but it can be outside of the object boundaries. Anchors are useful for objects that spawn on the water.

For an object with anchors to be placed, at least one of the anchors has to “match” in order for the object to be placed. Anchors can “match” in regular land and other land objects. This is different from normal land objects, which can only be buried inside land.

This key needs an object file name, an anchor count and a rectangle for each anchor. This key needs to be defined after the object definition.

Land decorations alter the appearance of the main terrain without adding any terrain. They are purely decorational.

The colour of the outline of explosions.

A spray is an image that is simply drawn on top of the land.

There may be several spray keys in the file, each one representing one spray object. The name is the case-sensitive name of the PNG file (without the file name suffix) of the graphics file, and number is the rough number of instances of this spray that may be added to the map. The number is the average number of sprays that are normally placed on a random medium-sized island. For larger and smaller landscapes, this number will be automatically scaled up or down. Please note that this number only specifies a rough goal, the actual number of created sprays may vary and you may have to play a bit with this number in order to find a good value.

The colour of the topmost part of the water (under the BlueWater.png ) before Sudden Death. This makes a gradient together with water-bottom . The default color is blue and matches the default BlueColor.png .

The colour of the lowest part of the water before Sudden Death. This makes a gradient together with water-top . The default color is blue and matches the default BlueColor.png .

The colour of the lowest part of the water while in Sudden Death. This makes a gradient together with sd-water-top . The default color neatly matches the default SDWater.png .

The colour of the topmost part of the water (under the SDWater.png ) while in Sudden Death. This makes a gradient together with sd-water-bottom . The default color neatly matches the default SDWater.png .

In combination with the default BlueWater.png , the recommended value for this is $80 , which also is the default.

The water opacity while in Sudden Death. Syntax and default value is equivalent to water-opacity .

Specified a custom water animation and flowing speed before Sudden Death. By default, the water just moves to the right and has no special animation.

The colour of the sky.

The sky color in reduced quality mode. If present, it is used instead of sky on low quality.

The number of clouds to create, before Sudden Death. Uses Clouds.png .

Number of clouds while in Sudden Death, uses the file SDClouds.png . By default it is the same number as clouds or 9 if clouds was not specified as well.

Normally, the clouds vary in size and are drawn on different layers. But if this key is present (any value) in theme.cfg , all clouds have the same size and are on the same layer (background).

Values for the flakes of this theme before Sudden Death. Uses Flake.png .

No flakes are used by default.

Sudden Death version of flakes , the parameters are the same as in flakes . This uses SDFlake.png .

If sd-flakes is unspecified, skulls and bones are used as images and the following default values are used:

(The “X” means the default number of Sudden Death flakes is variable. It depends on the window size and the terrain width.)

Name of the music file to be played in the theme before Sudden Death, e.g. Nature.ogg . You find music tracks in Data/Music of the Hedgewars installation directory. The file name is case-sensitive!

If you choose a custom music (i.e. a music which does not come with Hedgewars by default), you should also set fallback-music .

No music is played by default.

Name of the music file to be played in the theme while in Sudden Death, e.g. hell.ogg . If music was not specified, the Sudden Death has no default music as well. You find music tracks in Data/Music of the Hedgewars installation directory. The file name is case-sensitive!

If you choose a custom music, you should also set fallback-sd-music .

Default: sdmusic.ogg (only if music was specified, no music otherwise)

Note that if Hedgewars fails to find a music, it defaults to silence.

Like fallback-music , except it's for sd-music . If you have set a custom sd-music , you should also set fallback-sd-music , otherwise there will be silence if the track in sd-music is missing.

In version 1.0.0, this will default to sdmusic.ogg instead of silence.