Hats
History
Explanation of hats, how Hedgewars draws them and how one can create them 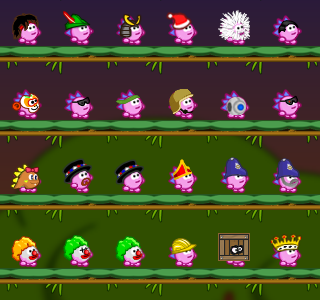 In Hedgewars, every hedgehog can optionally wear its own hat as decoration. They can be selected on a per-hog basis in the team editor. More info on the Hedgewars Wiki.

There are two types of hats: normal hats and team hats. Normal hats look always the same. Team hats are hats which will be colored accordingly to the team color. I.e. if a hedgehog plays in a red team, its hat will we red.

Additionally, hats can be either static or animated.

Hats are specified as PNG files with alpha channel (transparency). They consist of a set of sub-images of a size 32px×32px each. Hedgewars counts the sub-images, or animation frames, from top-left to bottom-left, then it goes on with the next column, etc.

These are the simplest hats. It's just a single 32×32 image containing the hat. This image will be put on the hedgehog's head with a vertical offset of 5 pixels.

This is a 64px×32px image with 2 frames. The left half is the base coloring of the hat, the right half should only use grayscale colors for the parts of the hat for which to use the team colors. The left part may be even completely blank. The same offset of 5 pixels applies here.

To create the final hat, Hedgewars will first colorize the right part to the team color, then overlay that on top of the left base image.

Animated normal hats use an image of a total size of 64px×512px. Only the first 19 frames are used, the remainder of the image is unused. It is best to keep the unused area transparent.

For animated hats, we highly recommend the use of the template (see below).

Animated team hats use an image of a total size of 128px×512px. This image is similar to that of animated normal hats, the same pattern is repeated 64 pixels to the right.

The team hat image consists of two “halves”: The left half is the base coloring of the helmet, the right half should only use grayscale colors. The left part may be completely blank. So you have basically two sets of helmet animations. Again, both animations have exactly 19 frames, the remainder is unused.

Hedgewars will use the right grayscale frames to color them and overlay them on the base color frames to the left.

Transparent pixels on the right part will not be overlayed. This way, you can decide which parts of the helmet become colored and which won’t.

When creating hats, it is important to know where the hat will be actually placed.

For static hats, this is trivial: Hedgewars will just move the hat up by 5 pixels before drawing it on the hedgehog. The hat will automatically slightly bounce up and down with the hedgehog idle animation.

Now to animated hats: In the game, Hedgewars will use the idling frames (see Data/Graphics/Hedgehog/Idle.png ) together with the hat frames. For static hats, the reference point is the first frame of Idle.png . If a hat is used, Hedgewars will draw the hat over the idling hedgehog for each frame, but first it will move the hat’s frame up by 5 pixels.

Another tricky part in creating hats is the fact that the idle hedgehog moves slightly up and down. This means, a good hat must consider this, otherwise the hat does not seem to be actually on the hedgehog’s hat, because it does not move with the hedgehog.

This table shows the relative height of the idle hedgehog compared to the frist frame of Idle.png :

This is how to read this table: If you would like to create a simple hat with no fancy animation, like, let’s say, a fedora, you would like the hat to “follow” the hedgehog. You could, for example, draw and align the hat image on the first frame, then copy it on all other frames and apply the offsets to the four “special” frames.

To install a hat, you have to save the file into Data/Graphics/Hats in your Hedgewars user data directory. The file name must end with “ .png ”.

Hedgewars will always use the very first frame of a hat image to create the preview in the team editor. This also applies to team hats.

For your convenience, we have created some templates to ease the creation of hats to help you to align the hats pixel-perfectly. Use them as background layer.

For GIMP users, we also have XCF files with layers for your convenience:

Use these images as a temporary background layer. They show a colored checkerboard pattern, each field represents an animation frame. The green and red fields are those where the idle hedgehog has an offset of +1px or −1 px (see above). The black fields are the unused frames.

In the front, the idle hedgehog can be seen, already shifted correctly. The gray hedgehogs remind you of the fields which need to be in grayscale for team hats.

A list of official hats can be seen here.

Custom hats (hats which are not part of the official Hedgewars installation) are only visible to other players if they have the hat installed under the same file name.

In case the other player does not have the custom hat installed, the player will see no hat instead.

You are encouraged to share your hats in the thread “Hats! additions, submissions, information.”, where submissions are considered for official inclusion into Hedgewars.